At the heart of our commitment to peace is a strong sense that there is something of God in all people. Over the years this has led Quakers to put efforts into living in a way that does not accept the barriers put up by societal structures or by nation states.  William Penn's Essay Towards the Present and Future Peace of Europe (1693) reflects that long history of Quaker concern, in proposing that nation states should be meeting and talking to one another in an early vision of a European parliament.

As the twentieth century progressed it became increasingly clear that we had to think globally, with world wars, a growing awareness of the planet as one ecosystem and wider awareness of the effects of the lifestyles of the wealthier citizens of the world on the lives of the poorest.

In spite of this, the nation state – and indeed the sense of separate nationhood within states – retains its appeal and potency. Whilst our governments seem to have some understanding global roots of conflict, the routes chosen to address security continue to be driven by a mindset that puts 'national interest' first and foremost, not least because of the cycle of electoral politics that means longer-term thinking is made unattractive.

Yet, when a region or a people is dominated within a state by a stronger part of that state that fails to recognise the particular interests and needs of the smaller part, it is entirely understandable that increased separateness and self-determination become such pressing aspirations, as we now see with some clarity from those who seek independence for Scotland.

More widely, the UK is very much beholden to the US, particularly in military matters. The recent,

now annual, Independence from America demonstration at Menwith Hill is another clear message – it is not acceptable that the country in which military-linked activities like those in North Yorkshire take place have so little say in what is really going on. This is activity in the US national interest but in the north of England and in many other parts of the globe. This is an inter-dependence we really could do without.

The independence movement that comes with the baggage of isolationism and ignorance is deeply problematic, as we have seen in recent UK electoral politics.  And worse still, is the seeking of separateness from people who might different from us within our own towns and cities. Peace-building at home and internationally must have the overcoming of isolation and ignorance at its core. 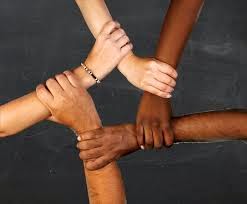 For Friends, and for many others who share our commitments to peace, justice and planetary care, we must find approaches that support the most vulnerable in society and in the world - which might mean independence and separateness from oppressive powers - whilst promoting awareness and action that recognises our interdependence on one another and  of other living things to one another throughout the globe, seeking power with others and 'power to ...' take action rather than power over.
Posted by Philip Austin at 8:41 am