Anti-war, alternatives and being there

I’m arriving late into the Quaker alphabet blogging exercise, but hope this won’t trouble readers unduly. As is apparent, this blog has been on the quiet side recently; so this seems a good opportunity to meander through some reflections on peace action and witness from a Quaker perspective.

As an opening offering, I am very aware that those involved in peace concerns are easily labelled as being ‘anti-war’ and as ‘activists’. Both of these terms come with their own baggage. NFPB itself has been shaped by its first thirty two years and the experience of two world wars and Quaker individual and collective dissent and opposition to these wars. It was and is emphatically ‘anti-war’. But to be anti-war has never been enough; peace is about living a different way in relation to our fellow human beings.

Activist - helpful or not? Most of us probably have an image of someone who is particularly motivated and active in campaigning, from writing letters, to joining demonstrations of different sorts, to organising meetings etc. But, rather similarly to the above, these particular forms of action that express our peace convictions are certainly not the be all and end all.   Which brings me to a third A - Alternatives. If we are living ‘in... that life and power that seeks to take away the occasion of all wars’, what does this look like in positive terms? Different things to different people, of course, but without some sort of sense of an alternative way of living together, of engaging with conflict and of promoting peace, anti-war activism can feel very sterile.

One of the positive things about Quaker peace work is that it embraces the range of witness and activity along the spectrum, from advocacy at international and national institutions to more radical direct action and to active promotion of peace-skills, such as through the Alternatives to Violence Project. We can feel encouraged by this variety, recognising what different people can bring at different times and in different places as having their place.
---
I’ve already mentioned the baggage that comes with a lot of peace witness; let’s just park that.

Bolshie: those who wouldn’t serve in the military during war time were known for being a bolshie lot, those of the WW1 period being described by Jeremy Paxman as cranks. Let’s hear it for the bolshie, cranky Quakers! Where would we be without them? (incidentally, I’d like to take this opportunity to say that, contrary to what the Mirror headline said, I don’t see myself as having ‘blasted’ anyone - I was simply asked for a comment on Jeremy Paxman’s programme and gave it, without blast or bluster.) 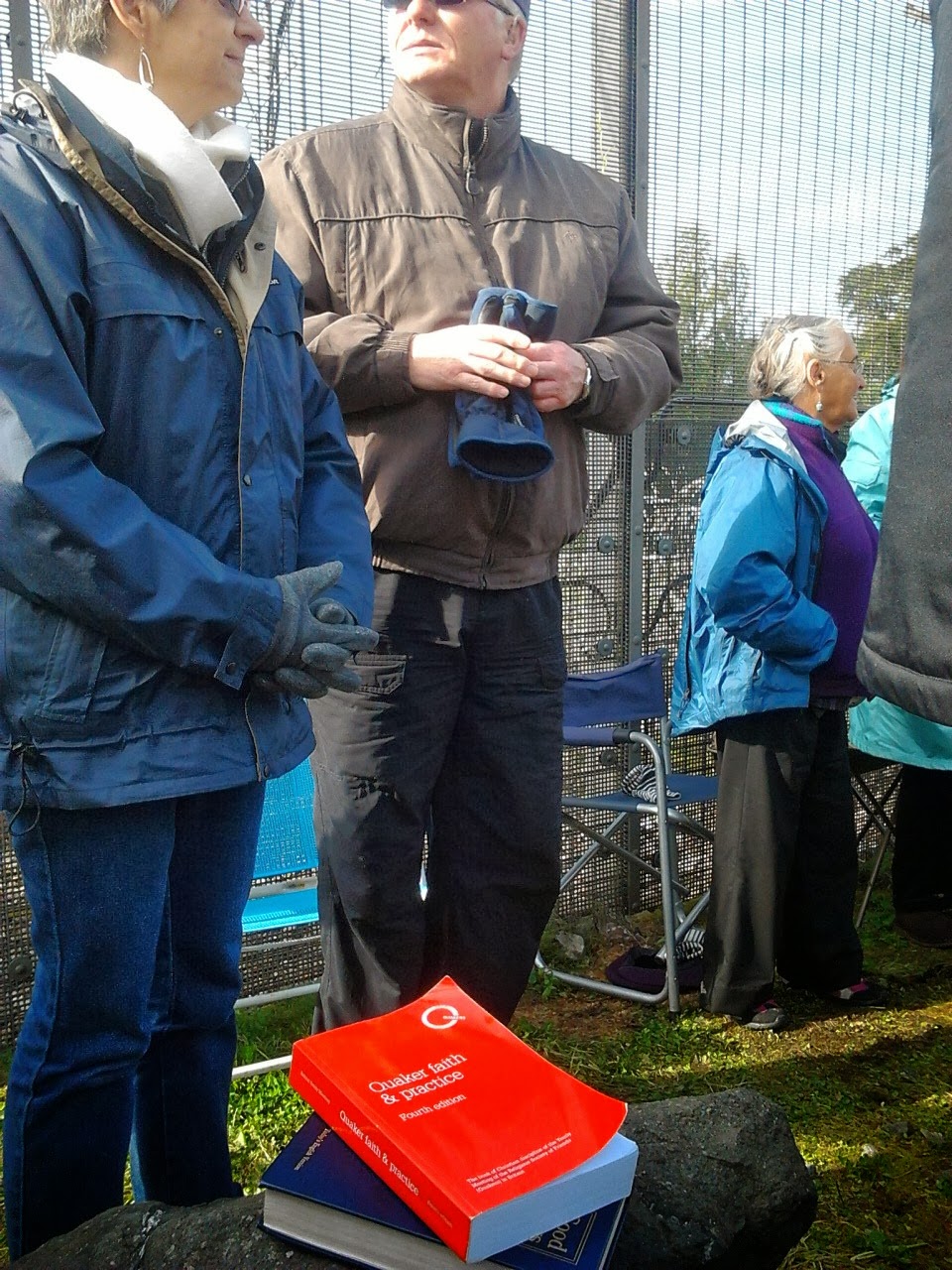 Being there: some of the most inspiring and powerful witness is as simple as that - just being there, witnessing. Friends gather together regularly outside military bases, sometimes in worship, at other times with a more emphatic political message - such as the weekly witness by CAAB at Menwith Hill.

Being there is also important in times and places of conflict; from the Ecumenical Accompaniment work in Palestine and Israel to the earlier work seeking to build east-west understanding during the cold war. There is a purpose to such work, but the outcomes are often very long-term and so not always easy to measure. Sometimes being there can be an important act of witness to human rights abuse; it can also create opportunities for conversation or dialogue. And at other times, being there, alongside others, is an important act of solidarity, expressing our commitment to one another as human beings even if we don’t have all the answers.

Finally, coming out of our centenary year last year, I have a strong sense of the value of long-standing organisations and groups ‘being there’, continuing the questioning, the seeking, the exploring of new ways of contributing to peace in the world.
Posted by Philip Austin at 10:58 pm