We're now in the final few days before our Walk of Witness - 'Walking the Walk', which will see a group of sixteen walking from Richmond Castle to Menwith Hill, both in North Yorkshire. 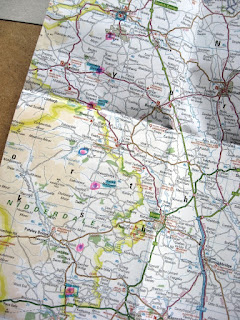 The significance of the locations?  In 1916, sixteen conscientious objectors were imprisoned at Richmond for refusing to put on a uniform and serve in the army. They were taken by train to France, where they were to be shot if their refusal continued.  (read the story in www.fredsakademiet.dk/tid/1900/1916/maj/richmond_sixteen.pdf)  That this didn't happen is probably due to a note being passed out of their train as they traveled through York, which then alerted local MP Arnold Rowntree.

Our walk will end five days later as people from all over the country gather at Menwith Hill for the Independence from America demonstration. We also now know more about what the NSA does as information has come to light, not through a note passed from a train window but through the actions of whistle-blower Edward Snowden. And there is growing concern about the promotion of military involvement in schools, armed forces events etc. The need for peaceful and determined Quaker witness does not seem to have diminished.

Peace witness is not just about these most alarming aspects of militarism and secrecy, however. The walk will commemorate the many ways in which Quakers and others connected with Northern Friends Peace Board have worked, promoting disarmament, justice, equality, dialogue, nonviolence, bridge-building and the many and varied foundations for a peaceful world.

We hope to post updates of the walk on this blog and via social media - find us on:
www.facebook.com/NFPB1 and http://twitter.com/nfpb1