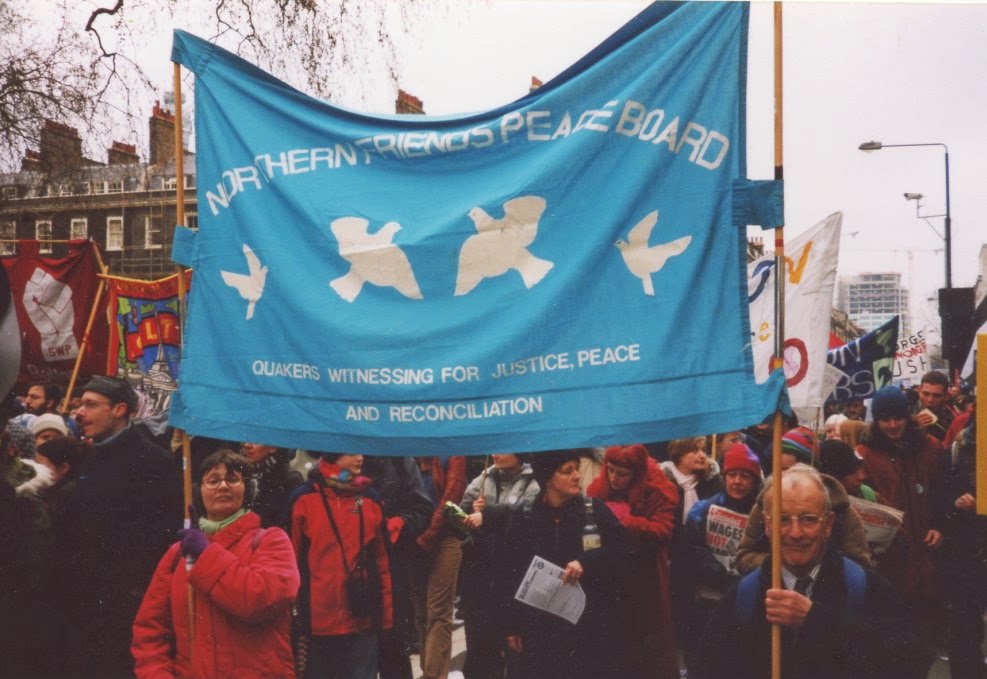 This picture, whilst not being of any technical significance, is evocative and is one that we’ve used quite a number of times in printed and electronic publications. It was taken at the big anti-war march in London in February 2003. Well, I say ‘march’. For those of us who joined the tail-end in Bloomsbury, it was more of a sporadic shuffle, and we certainly got nowhere near the march’s end point, Hyde Park, such were the numbers.  It was an event to remember though, just as the CND marches were for me in the early 1980s and the Aldermaston marches for others 20 years before that.

But marches have such different connotations in other contexts. When we hear politicians and military strategists talk of ‘boots on the ground’ we picture rows of military personnel marching together into action. The military marches that take place on troops’ homecoming also seem to be about staking a territorial claim.

So why has the peace movement been so preoccupied with marching over the years, with these uncomfortable associations?  Like the military, for peace and other campaigners over the decades, it’s a way of making a visible statement - we are here, there are many of us and we demand to be noticed.

I can’t be alone, though, in also finding myself sometimes uneasy in the bigger marches. A crowd develops its own psychology and it’s easy for people to be swept up in the mood.  Recognising this, the marches organised in the tradition of Gandhi recently - the Ekta Parishad marches in India - put great emphasis on training and preparing participants in the disciplines of nonviolence. And of course the US civil-rights marches were similarly focussed, with Martin Luther King and others recognising the damage to a movement that can come from violent responses to provocation.

The demonstration of conviction and concern is one outcome of a march. Another, and I don’t think this should be underestimated, is the building of a sense of solidarity and community. Those who have been on marches and walks in earlier years often seem to have a sense that they were important, being times when people were throwing in their lot with others; once you have been on such a journey together,  you have a commitment to the cause and to others who were there, to continue acting on that cause. So, we may not have got to Hyde Park in February 2003, but we were there, felt the mass of public feeling around that time  and, speaking for myself, have found strength and encouragement from that sense over the 11 years since.

Finally, in the midst of the recent remembrance Sunday events, was a very striking march, that of the relatively new UK branch of Veterans for Peace. Whilst not in military attire, there was something of the military discipline about their approach to the cenotaph with a wreath of white poppies. And then they stood and sang ‘Where have all the flowers gone?’. These are people who know what marching into war means… it is part of who they are; but their gentle, dignified walk was a very powerful expression of their commitment to the wording of their one banner ‘Never Again’. The video speaks for itself.