Following on from my previous post, we're now preparing for our NFPB members' meeting, to take place in Sheffield on 9th March.  Our speaker in the afternoon will be Ian Sinclair, whose book 'The March that Shook Blair' has just been published by Peace News.  As well as thinking about that particular London demonstration, NFPB members were of course active in other parts of Britain at the time.

On 22 February 2003, on the occasion of our 90th Anniversary, NFPB met in Preston and minuted:

We have been inspired and moved by our recent shared witness for peace in Iraq. It has been disconcerting to find ourselves in the majority in our witness and we have celebrated the experience of unity with large numbers of people from a wide range of backgrounds across the UK. We have acknowledged the challenges this brings, especially where we are part of coalitions where we find it difficult to unite with all of the views expressed, or all of the actions planned and taken.

We have reminded ourselves of the spiritual source of our witness, and of the significance of upholding in prayer all those involved. We recognise the importance of our holding faith that love can make a difference, and believe that public opinion has already influenced the delay in starting hostilities, and the language being used by our leaders about the nature and length of the proposed war. We have recognised the importance of making our witness visible in our communities, coalitions, press and governments. We can make a particular contribution in upholding those who are working for peace, supporting the growing yearning for peace that we are seeing across the world; and in promoting and sharing information about peaceful alternatives as widely as possible. We believe we are called at this time to hold all people in the light and to seek to find what love can do.
Posted by Philip Austin at 11:47 am

Marching for peace – then and now

The diverse group with whom I traveled to London on 15 February 2003 got nowhere near Hyde Park and the speakers. This was due to the sheer numbers of people with their banners gently shuffling on their way. As well as those on the street, there seemed to be support from people in buildings all along the route. Two questions I have heard asked many times since then are: what happened to all those people (probably at least 1.25 million ‘marching’ in London alone) and since then, why didn’t they continue protesting? The other, bigger, question is whether the march – and the others around the world that day – made any difference.

The March That Shook Blair, by Ian Sinclair, is to be launched at Friends House this week. The book explores, through oral history, both the nature of this anti-war coalition and the effectiveness of the march. The themes were also addressed at a conference in Friends House, organised by the Stop the War Coalition, on 9 February. It is argued in the book and by speakers at the conference that the scale of public opposition to the UK’s involvement in the invasion of Iraq brought our government very close to pulling out of the whole enterprise. Further, that it introduced a greater appetite for holding politicians and others to account that has continued in, for example, scrutiny of MPs’ expenses and the direct-activism of UK Uncut. If marching is only partially effective, there are many different types of action for change open to us.

I met a small number of Quakers at the anniversary conference, which attracted around 1,000 people, filling up a good portion of the Large Meeting House. Friends have often found the style of doing politics within the Stop the War Coalition unhelpful. The programme was congested, and there were speakers aplenty. Tony Benn spoke briefly but, sadly, seemed very frail. A familiar analysis cropped up time and again in these talks, more often than not focusing on imperialism by the US and its allies and the role of working people in resisting this. Interestingly, it seemed to be left mainly to speakers from the US and Canada to make the connections between anti-war campaigning and the need for action on climate change.

Salma Yaqoob, who has become one of the more familiar faces of the Stop the War Coalition, emphasised how important it was that British Muslims had been included from the outset. She spoke of the 2003 march being about common humanity, giving many Muslims a sense of belonging in British society for the first time. There is continuing prejudice, however, and civil liberties have suffered, nationally and globally. We were reminded by Victoria Brittain of the continued confinement of prisoners at Guantanamo Bay. The use of armed drones, about which concern is growing and spreading, was the subject of a packed separate session.

The wars have been waged at terrible cost, in financial and human terms and in creating hurt and resentment that will continue for years to come. Speakers from Iraq and Afghanistan brought this home. There were repeated calls at this conference for renewed campaigning and activism to challenge current and future military ventures.

For Friends, being pro-peace and looking at the conditions for building peace and justice has long existed alongside an anti-war stance. This is an important aspect of our testimony and, I believe, helps sustain longer-term involvement. The marches in 2003 were anti-war, loud and clear, but many also felt on the day that they were part of a powerful expression of humanity – a humanity that cares – in all its diversity. This continues to give me hope.
Posted by Philip Austin at 12:34 pm

On reaching our centenary year 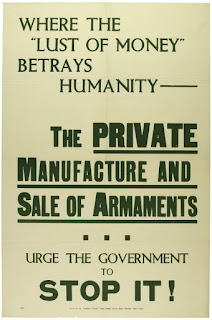 When, a couple of years ago, NFPB members began to think about the centenary of NFPB they were clearly excited by the opportunity it seemed to present for celebrating the work that has been done and raising our profile. Since then, a small group has met every few months to sift through the ideas and put together a coherent programme of activities and resources.

There is still some way to go before all of these come to fruition, but this year - the centenary year itself - we were pleased to be able to put on a celebratory afternoon and to present our booklet and 10 panel display that summarises, in words and pictures, the spread of work and witness Friends have undertaken in our name.

The event was also an opportunity to bring together past and present NFPB members and workers, supporters and interested enquirers.  For me, having worked as Co-ordinator for 22 years and already knowing all my immediate predecessors, it was something akin to a grand family reunion.

Below this, is a short news article I wrote about the piece for our website. A page of information about our plans for the year can be found at http://nfpb.org.uk/projects/centenary/nfpb-centenary-related-activities-during-2013

Perhaps the turning point for me in preparing for this year was the day I and a colleague spent in Leeds, going through and making notes from as many annual reports we could.  Whilst some of the text is inevitably prosaic and descriptive, there are more personal / spiritual reflections throughout.  Cumulatively, the work is inspiring and impressive in its scope.  Some of the more reflective text is profoundly moving, giving a good feel for the passions, challenges, insights and vision that has driven Friends’ collective and individual passions for this particular piece of peace work. 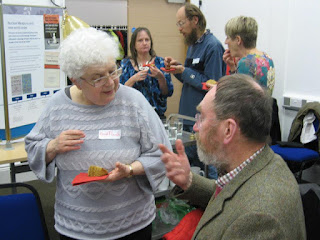 Northern Friends Peace Board marked the centenary of its formation with a party at the newly refurbished Manchester Meeting House. Set up after a peace conference of Quakers in the North in January 1913, the Board has undertaken a variety of work with and for Northern Friends, supported by funding and representatives from throughout the North of Britain.

The gathering in Manchester was reminded of the early challenges of the first world war and of supporting conscientious objectors through to the cold war and more recent conflict. The 70 Friends present also heard how the Board’s work had encompassed broader aspects of peace, recognising the roots of conflict in injustice, for example. Past staff and members joined with those involved now and invited guests. The first Secretary of NFPB, Robert Long (serving from 1913 to 1942) was represented by three of his grandchildren.

A pack of materials relating to the centenary is being prepared for Meetings, which will include a booklet launched on the day of our celebration. An accompanying exhibition was also on show and will be available in a variety of formats for Friends to use. NFPB members present at the gathering spoke of their appreciation for all the service that Friends have given to the Board over the years, of getting a better sense of the significance of its work and an eagerness to engage with Friends in discerning priorities for future work and witness.
Information about activities and resources relating to the centenary is being regularly updated on NFPB’s website at http://nfpb.org.uk/projects/centenary