Give an inch or two

Interesting report in The Guardian today, on the expected cost of widening the M6 motorway - could be up to £1,000 per inch, with the total likely to be double the UK's annual aid budget to Africa. David's cycle ride from the toe to the tip of the UK meanwhile (and what a good read his blog is!!) was set to raise just over £2,000 by the time he started his trip, towards high efficiency heating for Friends House. Perhaps the M6 widening project could be shortened by two inches to help him double that? And couple of miles could fund a lot of peace education projects around the country. I'd be willing to sit in a traffic jam for that.
Posted by Philip Austin at 11:26 am

Just back yesterday evening from a very interesting and varied week based at for the Quaker summer gathering.

The theme, Faith into Action, was explored in a linear fashion as the week progressed, beginning with sessions on waiting and discernment, through preparation and planning to action and then nurturing and sustaining our witness. There were gems in many of the contributions from the platform, but also in the numerous conversations and encounters with people in the course of the week. Recordings and transcripts of the presentations are being made available on the gathering's website here. 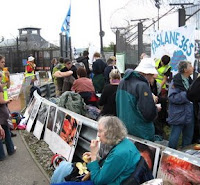 In the middle of the week I joined two coach loads of Quakers to Faslane, where we had a Quaker Meeting for Worship, met with a group of visiting Japanese peace activists - some being survivors of the Hiroshima and Nagasaki bombs – and then witnessed a tremendously moving act of nonviolent action by some of them at the gates of the nuclear weapons base. 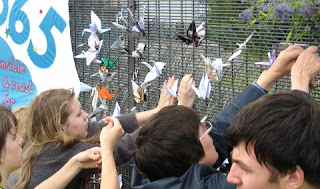 Origami paper cranes being tied to the fence at Faslane... 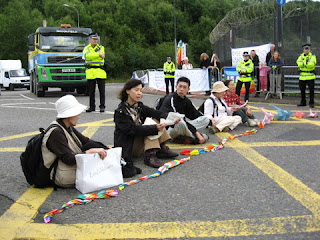 ... and laid in the entrance to the accompaniment of Japanese singing

Meanwhile, back in the wider world, I’ve been deeply disappointed to learn of the decision by Defence Secretary Des Browne to allow the to use Menwith Hill for its Missile Defence system. I had understood that the government was at least intending to consult Parliament about this. Can it be a coincidence that the announcement came just as parliament went into its long summer recess (back in early October)? The earlier decision about Fylingdales came just around a Christmas recess – there seems to be a pattern emerging. There has been some rejoicing about the planned closure of DESO, the Defence Export Services Agency, though the cynic in me is inclined to think that this may be more about public relations than a real change in policy and practice. I’ve not had a chance to read much about this yet, so perhaps I will have the pleasure of being proved wrong on this one. 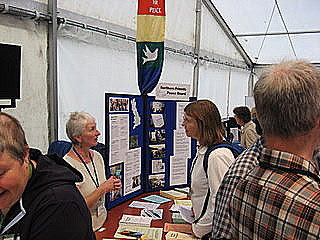 The NFPB display during the 'fair' at the gathering

And what about the weather…!? In , the marquee we used for our sessions kept us protected from some very heavy showers and strong wind. News from elsewhere in was worrying, with flooding widespread. Many assume that this is a clear evidence of climate change. Whether or not that’s right, the theme of treading lightly on the world (in terms of size of ecological footprints) was woven through the gathering, as was that of community. I am reminded of the wording on some of our NFPB resources … “We must re-learn the ability to live together in harmony in this fragile and endangered world.”

I'll be joining other Quakers from around the land next week for their Summer Gathering, this year at Stirling University. I've popped into a couple of the earlier SGs but never yet participated in a full event. I'll be facilitating a workshop on Speaking our Peace on Sunday, visiting Faslane and exhibiting our wares at a market-place type event on Wednesday maybe doing another mini-workshop on Thursday. And lots of meeting, talking and being with others throughout the week, all around the broad theme of "faith into action". And maybe I'll find a computer somewhere to share thoughts on this blog while I'm there.
Posted by Philip Austin at 4:35 pm

Pedalling for the planet

David Gee, from Quaker Peace & Social Witness, is spending his summer do a Lands End to John o Groats cycle ride, all in aid of a CHP boiler at Friends House, which is apparently extremely energy efficient. He's been having a wet time of it so far, not yet a week into the trip, but is keeping a highly readable blog along the way and no doubt would still welcome sponsorship. Follow David's progress at: sorebottom.blogspot.com
Posted by Philip Austin at 4:25 pm

"On Thursday 14 June the Scottish Parliament voted by an overwhelming majority to call on the UK Government not to go ahead with its plan to renew Trident.", reports Scottish CND. Further details of the debate are also available from the Acronym Institute as part of their interesting new coverage of parliamentary activities in relation to disarmament etc. If this vote was significant, you'd hardly know from the very meagre coverage in the mainstream press. With new deputy Labour Party leader, Harriet Harman, having suggested a review of the decision to replace Trident was in order, perhaps there may be some scope for change in the Westminster as well as the opposition from Hollyrood.
Posted by Philip Austin at 3:30 pm