We've just overshot the date at which the UK might have exited the European Union. If and when that happens now is very unclear. But the mark on people's calendars for either parties or acts of sad reflection, will remain as an historic record of a politics that has gone awry.

These are extraordinary times, not just because of Brexit, but also the range of social, physical and geo-political challenges that face us. Northern Friends Peace Board members, meeting at the beginning of March, reflected on this, with a paper of reflections and questions in front of them.

As I write, we are into extra time before the next point in this national political crisis. This time might entail another opportunity to vote – putting our X on the ballot-paper.  With issues so unresolved, it is in the nature of the lead-up to any further vote that it will be used by those involved to both promote their particular vision but also to argue against others, and all too often to denigrate them or others in society.

It will be crucially important for journalists, citizens and anyone with a public voice to scrutinise assertions and challenge the language of hate. In relation to the EU elections, QCEA has recently set up a particularly helpful website https://www.chooserespect.eu , aiming to change the conversation from hate-speech. This will be just as important in whatever electoral context we find ourselves next.

Posted by Philip Austin at 5:36 pm 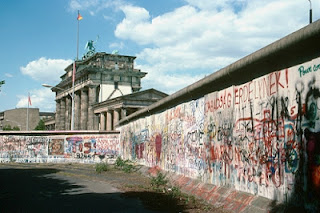 A family member in their 20s has recently returned from a first trip to Berlin. It's just over 30 years since I was first there, and of course approaching 30 years since the wall was opened up. We have had interesting conversations, comparing impressions and experiences, but it has also got me thinking about that most momentous of period of change across Europe.


My 1988 visit to Berlin and to German Democratic Republic (East Germany) was one of a number of times when I had joined Quaker groups crossing the iron curtain, meeting a mix of 'official' peace committees and the like (government sponsored and managed outfits) but also ordinary people. People-to-people visits in both directions were a significant area of peace action for Quakers and others in that cold-war era, affirming a common humanity in spite of all the geo-political obstacles put in our way.

That was then. As we approach – at the time of writing – continued uncertainty about the timing or even completion of the UK's exit from the European Union, what about our relationship now with other parts of Europe and our own constituent parts?  As Quakers, one point of continuity is a hope and vision of a Europe that expresses our values of peace, tolerance, cooperation, fairness etc. Whilst the EU has enabled some of these to be given practical expression, it has not always been perfect and Quakers have taken a positive role in creative and critical engagement.

Whatever the political relationship between the EU and the UK, our Quaker values will be the same. If we do leave, we will need to think again about how to not let international barriers get in the way of bonds of friendship and common humanity, of collaboration towards a new vision of peace, human rights and common security. We will still be part of the wider European family of nations through the Council of Europe, for instance. If we do remain in the EU, what might be our particular British Quaker role in supporting the advocacy by QCEA, maintaining and developing our vision and our hopes for a compassionate Europe?

Equally, whether we leave or stay, there are now social and political walls throughout our land that have been both the soil from which Brexit has grown, but also a consequence of the discourse (or lack of ) around it. Can we put energy into people-to-people work in our own localities, between our constituent parts of the UK, as well as across the continent? What can we do to bring about a vision of just and compassionate society within this country, however our own countries decide to organise and relate to each other?
Posted by Philip Austin at 8:19 pm