Paul Ingram, director of BASIC, the British American Security Information Council, writes in a recent press advisory...
"This is the clearest indication yet that nuclear disarmament has now achieved the mainstream - and it is now out of touch to oppose it. This is a speech that represents a clear departure not only from the current Administration..."

And the big surprise is that he's writing about the Republican Candidate for the US Presidency, John McCain. He is qu0ted as saying in said speech:
"The truth is we will only address the terrible prospect of the worldwide spread of nuclear arms if we transcend our partisan differences, combine our energies, learn from our past mistakes, and seek practical and effective solutions."

Coverage of the other candidates views on nuclear weapons and other foreign policy issues can be found on the Council for a Livable World's website.

And the recent 'Prep Comm', preparing for the Nuclear Non-Proliferation Treaty Review Conference in 2010 is reported on in depth by Rebecca Johnson on the Acronym website and by Reaching Critical Will. The latter reported that:
"Over the course of this PrepCom session, several delegations made substantial, concrete proposals on specific issues related to strengthening and implementing the Treaty. Some of these proposals have generated broad interest, momentum, and/ or convergence, suggesting they are or could be ripe for action by the 2010 Review Conference."

Reasons to be cheerful? Certainly a little less despondent, perhaps...

Meanwhile, coming soon to a nuclear submarine base near you (if you live in the west of Scotland), and to remind our own politicians of the public's continuing unhappiness at UK nuclear weapons policy...

Peace Chain Around Faslane Saturday 14th June 2008
The Peace Chain date marks several important anniversaries:
* One year ago, 14 June 2007, the Scottish Parliament voted against the UK Government’s plan for a new nuclear weapon system.
* The day of the Peace Chain also sees the celebration of the 26th birthday of Faslane Peace Camp.
* 40 years ago, 14 June 1968, the first British nuclear patrol – HMS Resolution – sailed from Faslane.
* This year is also the 50th birthday of CND and its struggle against nuclear weapons.
In SCND’s history never before has there been such concerted and widespread opinion against nuclear weapons in Scotland – both amongst elected officials and the general public – and so with this Peace Chain we intend to mark not only anniversaries of past events but a real hope for the future.

Peace Tax, conscience and all that 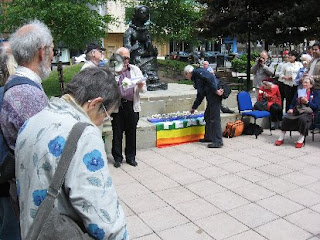 I enjoyed the company of Robin, of the Peace Tax Seven, at Britain Yearly Meeting (Quaker annual conference in Britain) last weekend, as we shared a display table in the small groups' area. They're joining with conscience: the peace tax campaign in hosting the 12th International Conference on War Tax Resistance and Peace Tax Campaigns, from Friday 5th to Sunday 7th September in Manchester this year.

Manchester was also the location for a ceremony on 18th May, marking the Right to Refuse to Kill. These ceremonies started off in London and are now spreading across the country. Here's a photo from the Manchester event.
Posted by Philip Austin at 12:32 pm

Congratulations are due to the British government for its decision to cease using cluster bombs. The Guardian reports that:
"The government is preparing to scrap Britain's entire arsenal of cluster bombs in the face of a growing clamour against weapons that have killed and maimed hundreds of innocent civilians.
Officials are paving the way for the unexpected and radical step at talks in Dublin on an international treaty aimed at a worldwide ban on the bombs.
Well-placed sources made clear yesterday that despite opposition from the military, the government is prepared to get rid of the cluster munitions in Britain's armoury."

Another report comes from Ekklesia

We produced a leaflet about this problem some years ago but have not been actively working on it since then. The national and international campaigns that have been working strenuously over recent years have almost certainly contributed to this change in government policy. Find out more about them and the process (known as the Oslo Process) that has led to this point:

Now, if governments can be persuaded that landmines and cluster bombs are wrong for the indiscriminate harm they cause civilian, could they be helped to see that the same logic and compassion should be applied to nuclear weapons? Thankfully, they have not yet been used in anger, but are continually deployed around the world. The International Campaign Against Nuclear Weapons - ICAN - aims to abolish all nuclear weapons via education, empowerment and via a Nuclear Weapons Convention.