George Monbiot in the Guardian today points to the contradictory messages that our Government has been giving about nuclear weapons in recent years. He reminds us of the NPT commitments that oblige signatories to work towards complete nuclear disarmament, but then draws attention to the information uncovered by CND last week ...

[from the CND press release] Ministry of Defence documents obtained by the Campaign for Nuclear Disarmament reveal the Government plans to replace Britain's nuclear warheads, despite Ministers repeatedly telling MPs that no decision would be taken until the next Parliament. The shocking revelation came to light in a speech to the arms industry executives by David Gould, then chief operating officer at the Defence Equipment and Support Organisation, now released under the Freedom of Information Act. [See note 3 and below for the documents] Whilst the Commons voted last year to replace the submarines that carry the UK's nuclear warheads on Trident missiles, the White Paper and repeated ministerial statements since then [see note 4] have claimed that no decision would be taken on replacing the explosive warheads themselves until the next Parliament, expected to be 2010 at the earliest. Today's revelation that a senior defence official has been privately telling industry the opposite, suggests that Parliament has been misled.

Monbiot writes: According to a leaked briefing by the US Defence Intelligence Agency, Israel possesses between 60 and 80 nuclear bombs. But none of the countries demanding that Iran scraps the weapons it doesn't yet possess are demanding that Israel destroys the weapons it does possess. and continues further on in his piece: The permanent members of the UN security council draw a distinction between their "responsible" ownership of nuclear weapons and that of the aspirant powers. But over the past six years, the UK, US, France and Russia have all announced that they are prepared to use their nukes pre-emptively against a presumed threat, even from states that do not possess nuclear weapons. In some ways the current nuclear stand-off is more dangerous than the tetchy detente of the cold war. 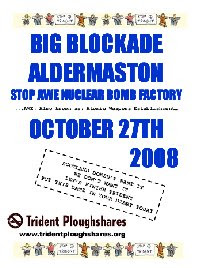 weapons factory are keen that people make the connections and attend the next Aldermaston Big Blockade on 27th October 2008.
Posted by Philip Austin at 1:56 pm